With commercial casting you will have to solder on a "sprue" to the silver model to enable the company to hold the item when making a rubber mould. It is best to contact the company beforehand and find out their specific requirements as to the positioning of the "sprue". Some companies will actually make and attach the "sprue" themselves but this adds to the cost.

Commercial casting involves making a rubber mould around your item. This mould is injected with wax which enables making many wax models from the same mould. The large commercial casters use a mechanized process to produce if necessary thousands of wax models in one session.

<>Did you know that Cuttlefish have ink which was called sepia. The Cuttlefish's important dye has effectively been replaced in today's commercial world by artificial dyes, particularly in the photographic industry where it is used to imitate old images.

Casting is essentially used to re-create identical items many times over. The three common methods of casting silver jewellery are:- 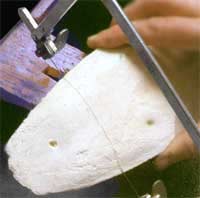 Cut a square from the cuttlefish making sure to use the thickest section.Then slice the bone in two halves. Use fine sandpaper to make the cuttlefish smooth. It is important to try and make the two flat surfaces of the cuttlefish halves as flat and smooth as possible so as to avoid unwanted blobs or scratches appearing in the silver. 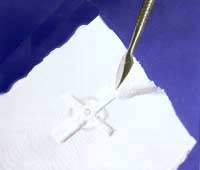 With a modeling knife carve the desired design out of one of the halves of the cuttlefish - the photograph shows carving a basic silver cross. At the top of the cross cut out a deep groove or channel in which the molten silver will be poured. Once you have cut out the design you can now bring back the other half and place it over the top. The two halves need to be firmly held in place so for that you can wrap steel binding wire around them. Using tongs holding a crucible of molten silver you can now pour it into the channel that was grooved out of the cuttlefish.

Once cool, cut loose the binding wire and very gently break open the two halves to reveal the silver cross. Allow to cool and then finish the item with pickling and subsequently filing paper to smooth out the surface.

If you cannot find cuttlebones a good alternative is using "delft clay" which is a special clay system used solely for casting. Its advantage is that it can produce a better surface although its disadvantage is that it is firstly quite expensive and secondly it generally cannot be re-used once it has dried out. If you choose to use Delft Clay do not quench in water - instead tap the mould and it ought to crumble apart.