What is Rainbow Moonstone?

Why it is called moonstone? It is because of it light reflective qualities. Shimmering hues of blue and white similar to that of a full moonlit evening. We have more information about moonstone on our page about moonstone We also feature some Labradorite which like moonstone is a feldspar. It was named after its state of origin - labrador. Its crystal like structure is composed chiefly of Sodium and calcium.

Rainbow moonstone is different primarily because of its blue colour. One can observe a far deeper blue and in some light conditions it can be seen to refract light into the colours of the rainbow. It is also a lot rarer than its common counterpart. The main source of rainbow moonstone is sri-lanka. Another distinguishing feature is that its texture is slightly more crystalline than ordinary moonstone.

It is best to avoid direct sunlight as this can cause some discolouration of the stone. It is also prudent to avoid washing detergents and liquids that not only affect the Sheen of the stone but can also react with the cement used for its setting and loosen the stone. 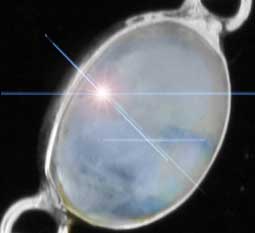 Of greater value is the rainbow moonstone - so called because of its hue of rainbow colours. Since it tends to have a greater concentration of shiny blue it is in far greater demand. Supply has been outstripped by demand hence the higher price tag for this variety. There are a lot of myths and legends surrounding rainbow moonstone. Not least of all was the tale that to enhance a good harvest, a lump of rainbow moonstone would be hung from a tree close to the crop.

What is Rainbow Moonstone?

How does the colour of rainbow moonstone change?

Moonstone is quite fragile and is only 6 on the Mohs' scale. However a dulled Moonstone can be specially polished to enhance its mystical light.

We have a pair of silver bracelets with some fine examples of this cherished gemstone. Copyright © 2017 silverstall.com