Silver necklaces with Mother of pearl 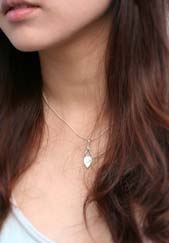 What is Mother of Pearl?

Mother of pearl is basically the lining of shells or a mollusc. Tortoiseshell on the other hand is the lining of the hawksbill turtle.

The mother of pearl is naturally water-proof and reasonably tough, although it is moderately brittle which is why its used as an inlay as the surrounding silver protects it.

Black nacre refers to the inside lining of the Tahitian oyster which in turn produces the infamous Tahitian Pearl otherwise known as the black pearl. 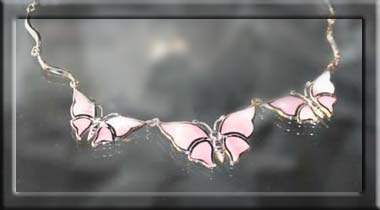 A delightful collection of pink necklaces using only mother of pearl and sterling silver. The pastel pink colour is laminated by the smooth sheen of the surface of the shell. 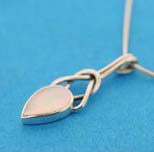 A fluorescent White is the colour most frequently associated with mother of pearl. With reflection and refraction of light the colour is distinguished by being a light grey that has either a hint of green or blue. Its a material that has been used for centuries to create wonderful and colourful jewellery.

A selection of necklaces with multi-coloured mother of pearl. The beautiful mosaics of various colours all accentuate the sheen and egg-shell glow of this marvellous natural material.

This mother of pearl jewellery is all in a combination of various pastel colours including pink and light blue. Extremely versatile as the spectrum of colour opens your wardrobe door to many complimentary attire.

Pearls are formed when a foreign particle enters an oyster or mussel. The mollusc then secretes a nacre around that particle. Nacre is mostly calcium carbonate(CaCO3) but can also contain a small amount of conchiolin which are fragments of the outer shell of the mollusc.

All the necklaces are hand-crafted from sterling quality silver. They are dispatched in a large silver jewellery velvet bag or gift box thereby making them a wonderful choice of present.

We have a range of earrings to match and currently we have some mother of pearl stud earrings at a special introductory offer.

Mother of pearl has been used for making jewellery for centuries with some earlier samples of ancient Egyptian jewellery being decorated with an inlay of it.