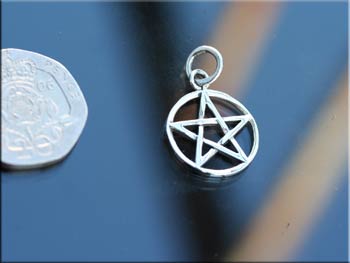 A small version of the infamous pentagram pendant. The diameter of the pentagram is 16 mm and it weighs approximately 1 to 2 grams. It is cast from highly polished silver. You can compare the relative sizes of the pentagrams by reference to the UK 20p coin shown in the image. 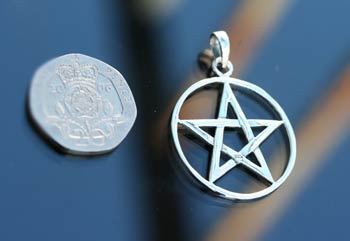 Pentagram in a circular sterling silver pendant. It is also associated with both Christian and pagan beliefs. The medium size is 27 mm in diameter and weighs roughly 2 grams. It is of the regular type with its uppermost point facing upwards. The pendant bale consists of a ring of silver with a welded join. 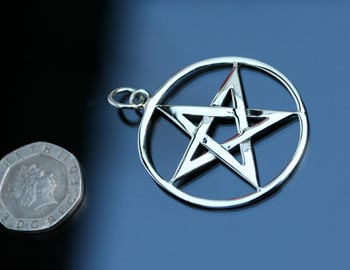 A classical and mythological design of pentagram set in sterling silver. With a diameter of 35 mm it weighs over 6 grams and can be suspended from a chain or thong of up to 7mm in diameter. Some say it represents the power of matter over spirit and has many spiritual interpretations.

A unique version of the pentagram pendant. The focus is directed to a spider sat on the star. Despite its moderate size, it is quite a heavy pendant weighing in excess of eight grams. It is 2mm thick with a 30 mm diameter. Its uppermost triangle points upwards in line with pendant bale. 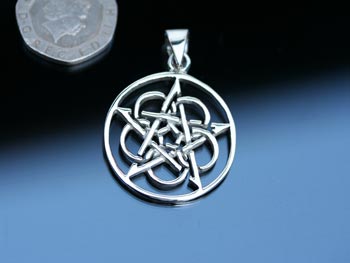 The five points and circles represent the 5 elements of earth, water, fire, air and spirit. There is an inner pentagram located at the centre. This stunning silver pendant weighs 4 grams and has a diameter of 27 mm.

This timeless design can be worn at any time, whether you are a follower of pagan witchcraft or a simply a follower of fashion. The infamous five pointed star has a long association with Freemasons, ancient Greece and Babylonia.

It also has a long association with Christianity, as some say the five points represent the five wounds of Jesus when he was crucified. The pendant is a strong symbol of various faiths and beliefs.

This five pointed star is a strong symbol of various faiths and beliefs.