Marcasite as a Substitute for Diamond Jewellery

In the UK its popularity increased during the late 19th century particularly during the art nouveau era of jewellery design. It became known as the substitute for diamonds. Only the few could afford real diamond studded jewellery and the imitation diamond jewellery that was on offer during this period was not very appealing. Gradually European jewelers began extending their range by introducing more and more marcasite jewellery which satisfied both the aesthetic needs of those craving diamonds together with the needs of those who wanted natural, real gems over imitation. 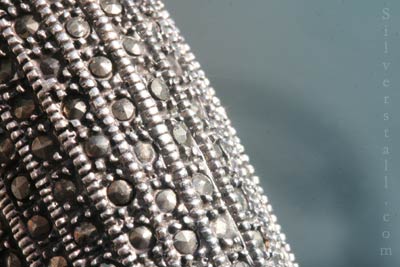 Marcasite are the crystals of the mineral iron sulfide which is basically Iron and sulphur in almost equal quantities. Less than .2% of it is Silicon dioxide with trace amounts of arsenic and copper. Another form with the same chemical ingredients is Iron Pyrite or as it is sometimes known "fools Gold"

Crystals of The mineral are quite hard but also very brittle making it difficult to cut and work with. In a polished and fresh condition it is almost silver in colour however it very quickly oxidises to form the tin colour with a hint of yellow. 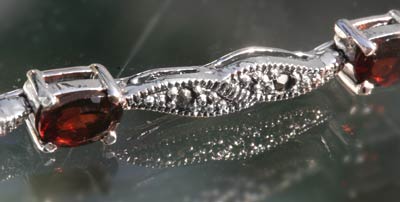 Most marcasite stones today are machine cut into round, multi-- faceted cones. These small cuts are then glued into a cup of a corresponding size. The most common medium used in jewellery for such stones is silver. This marcasite bracelet with garnets shows to what good effect marcasite can be used with other gemstones.

When did Marcasite first appear?

The word marcasite can be traced back to the Moors and the first real evidence of the use of marcasite stones for decorating jewellery are found in samples of late 8th century Moorish jewellery. 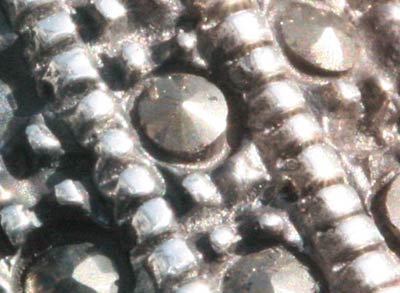 One of its earliest reference is in the works of 'Jabir ibn Hayyan' (known to the West as Geber). In 751 Jabir created illuminating ink for scripts from "golden marcasite" that could be used instead of the expensive real gold.

Did you know? - silver is arguably the best backdrop to marcasite because of the contrasting hues of silver colour.

Despite being designed to emulate diamonds, marcasite jewellery has attracted some value in its own right. So much so that it has become copied itself in the form of cheaper steel jewellery that is cast with small nodules resembling the pyrite crystals.

Marcasite jewellery is best cleaned by very gently rubbing the stones with a silver polish cloth. Avoid excessive or harsh rubbing as this may dislodge the stones.