Warning, please do not confuse birth stones with zodiac gemstones which are used in astrology as a reference to a persons zodiac sign and not the month in which they were born.

If you are looking for an inexpensive item of silver jewellery for February then we have a lovely little amethyst toe-ring which cradles a toe with a lovely little purple gemstone.

There is a strong connection between the historical use of birthstones with the Biblical Aarons breastplate. 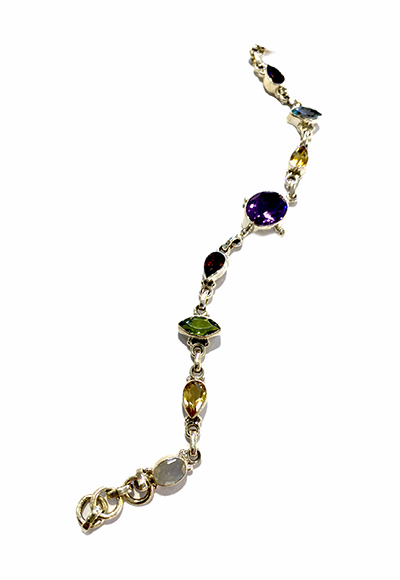 
Some gemstones, are traditionally associated (in Western cultures) with the month in which you were born. These gemstones are often in their crystallised form and can vary widely in colour to reflect the month of the year:-


This chart of birthstones does vary from culture to culture and has changed throughout the centuries. For example prior to the influence of Buddhism, the ancient Chinese region of Tibet used a mystical Birthstone list which was used to warn of impeding troubles.

There are both modern and traditional variations on the stones associated with birthstones. For example some say Tanzanite is the 'modern' association with December as opposed to the 'traditional' interpretation of Blue Topaz. Whatever those associations are, our advice is not to take it too seriously and choose whatever stone you like, as their is no scientific or logical basis for any stone to be associated with the month in which you were born.

Some say that wearing birthstones for healing purposes is not scientific but science fiction however few would dispute that at the very least a belief in their healing capabilities may produce a placebo effect.