Amethyst is the zodiac stone for Aquarius and the birthstone for the month of February. 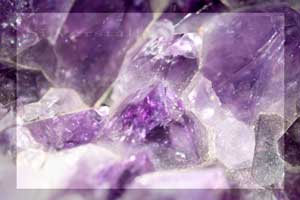 Amethyst is a variety of the mineral called quartz, the purple or bluish-violet colour of which is due to manganese. In recent times some say that the purple colour is attributed to the closeness in the ground to uranium. Evidently the radiation causes electrons to quit the impure aluminium atoms creating a deep purple centre.

It gets its name from a Roman maiden called Amethyst who the Roman god of wine - 'Bacchus' -turned into a rock crystal. Horrified at what he had done he threw down his goblet of wine which turned the rock crystal into the purple colour that we know today.

It is an extremely versatile gemstone and it is used with both precious and costume jewellery. Even the latest body jewellery uses Amethyst in for example this belly bar which has an amethyst stone as its centrepiece.

It is transparent and quite brittle. It can be cut into faceted gems as well as en cabochon. This locket has a facet cut amethyst which has been cut in a similar fashion to a diamond.

Where is Amethyst From? 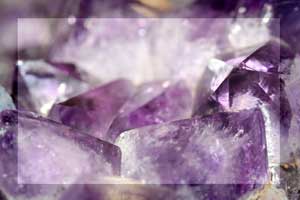 Significant quantities of amethyst rocks are found in many African countries, Thailand, Indonesia and Brazil. This bracelet for example uses Amethyst from the infamous "Thunder bay" a large mine in Ontario Canada. Amethyst's quality varies by from region to region and a closer examination will identify its source by reference to its size, colour and chemical composition. For example the Amethyst found in Africa and Australia tends to be smaller but darker than the amethyst found in the Americas.