A stunning dragonfly brooch with a tail composed of a string of garnets, bordered by marcasite silver.

A wonderful present for any connoisseur of garnets and marcasite jewellery.

Legend dictates that Noah used a faceted cut garnet to illuminate his ark. Later in mediaeval times the garnet was thought to be a cure for depression. It is the birthstone for the month of January and the Zodiac stone for Capricorns.

Instead of a dragonfly why not consider a spider. We do have a design which we hope to make available soon and it is an amethyst spider brooch

A Brooch with Garnets 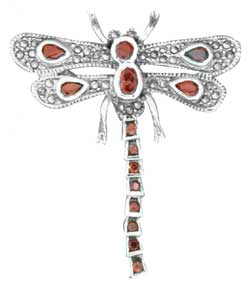 £18.95 - Sterling silver marcasite dragonfly brooch with faceted garnet stones. The centrepiece or dragonfly body, is set with a round cut garnet stone above an oval shaped garnet. The tail is set with eight square cut garnets whist the wings are decorated with a pair of tear drop shaped garnets. This stunning piece of jewellery is further decorated with a sparkling array of dazzling little marcasite stones. 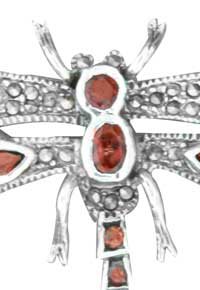 Approximate height is 50 mm by a width of 45 mm. Its weight is roughly nine grams and the solid construction made entirely of sterling silver means it can withstand all weather conditions if worn on an outer garment. The garnets in its tail have a diameter of approximately 2 mm. Each of the four garnets in its the wings have a larger, oval shaped garnet, that measures roughly 3 mm by 5 mm.