Marcasite is a mineral sometimes referred to as white Iron Pyrite although its crystals do form differently from ordinary pyrite and are more brittle.

Marcasite was very popular in the 1930's when it was sold as a substitute for diamonds which few could afford during the economic conditions of the time.

The Wings are gloriously brought into focus by the marcasite stones. The other side of the butterfly is plain silver. 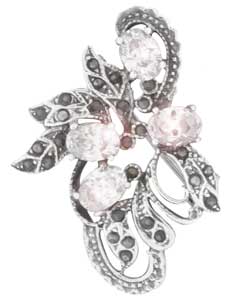 £15.95 - A silver marcasite brooch with four stunning large crystal stones. The asymmetrical design permits the brooch to be worn at a variety of angles and is open to interpretation as to what it represents. Some say it has loose similarity to a rabbit whilst other think it looks like a dragonfly in a flower. The brooch is decorated with marcasite stones, which enhance this intriguing and unique jewellery design. The pin is fastened with a rotating safety catch. 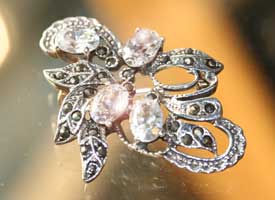 It weighs slightly more than eight grams and is made entirely of sterling silver decorated with marcasite stones. The pin is similarly solid silver and at its widest point it measure approximately 37 mm. Each of the four white crystals are oval cut to a maximum width of 7 mm. They are brilliant white in colour and look extremely like real diamonds. Each stone is clawed into place by four silver posts.