We stock hundreds of more designs than those shown here, with many on show in our Plymouth Shop. We are endeavouring to update the designs on this site however the rapid change of design makes it a long term project, so please bear with us.

How to distinguish Heavyweight from heavy duty 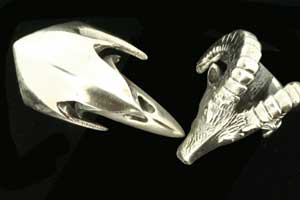 Not all rings that are heavyweight are heavy duty and vice-versa. For example we stock the four, six and eight piece puzzle rings with instructions on how puzzle ring reassembly them. Those rings whilst they are relatively heavyweight are composed of a series of precision cut puzzle rings which together cannot be really said to be heavy duty. Similarly a mush lighter solid band of silver can be described as heavy duty because clearly it is capable through its design of enduring greater degrees of stress and torque than an intricate or delicate styled ring.

The Two silver rings shown in the image are from a selection of those weighing in excess of 20 grams. The examples show how much larger the heavyweight rings tend to be. The designs are both novelty and classical. They include classical designs such as the skull or large pentagram ring, as well as novelty designs such as the panda or spinning ring.