Wearers of the third eye pendant are to be found throughout centuries of history. it was believed the eye would give them an advanced warning of an impending disaster and reveal hidden attackers. 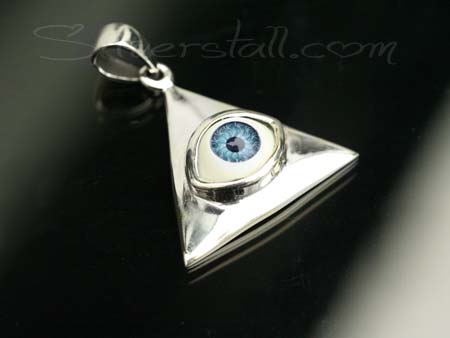 £9.95- A Mythical eye Pendant, hand crafted from sterling silver. The blue eye is set in a triangle of silver and is linked to myths of being possessed by magical insight and spiritual properties. The eye is cradled in a wall of silver that also represents eye-lids.

The 'third-eye' pendant weighs nearly 4 grams of highly polished hallmarked sterling silver and measures approximately 25 mm x 25 mm. It can be hung from a chain or thong of up to 5 mm in thickness. Please note previous versions of the same pendant were in blue which we hope will return shortly.