How to Put Back a Puzzle Ring

The process of assembling four piece puzzle rings is almost exactly the same for six and eight piece rings. In those cases the additional rings should be treated in the same way as rings C and D.

Do not use excessive force in trying to assemble the the rings together as this can damage the shape of each ring. Instead apply only a gentle force because if the procedure is followed correctly they should fall into place.

If you feel yourself becoming frustrated then take some time out. Leave for a minute or tow to make a cup of tea. When you return shake the rings and start again.

Once complete all four rings should sit snugly into place.

Assembly of the eight piece puzzle ring is the same as the four piece provided you treat the rings in pairs so that the four outer rings can be treated as rings A and B. 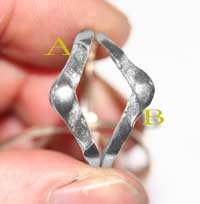 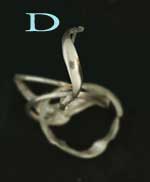 The first step is to identify each of the four rings. We have labelled the rings A to D. It is crucial you identify them. A and B have to larger arrow shaped blobs of silver on them. It is important to distinguish between A and B. A has four small dimples (two on either side of the blob) whilst B has two small and subtle dimples (one on either side). D has a smooth wide curve whilst C has a dimple in the middle of its widened curve. 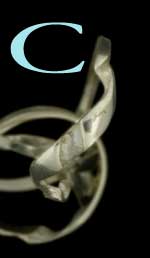 The next stage is to hold A and B as shown in the photograph. Both rings should be facing upwards. Make the shape of a diamond and then drop those two bands below C and D. You can drop them either to the right or left so long as you drop them together in one direction. 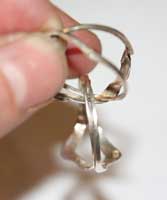 Rotate C and D so that both of its wider curves are facing upwards, then rotate them so that C is over the top of D. Now turn them both upside down. Hold onto C and rotate D anti-clockwise so that the narrow part of each ring shank sits alongside each other without overlapping. If you have done this properly then when you rotate both C and D upwards you will see they have formed a figure of eight shape. If the rings prevent you from doing this then C and D were in the wrong position so return them facing upwards and make sure you have D overlapping C before you turn them upside down. What you trying to achieve is C and D in a figure of eight position whilst trapping A and B as per our image. 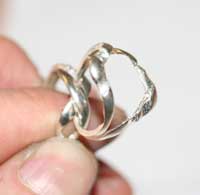 Once you have achieved the figure of eight then hold it so that although intact it is quite loose. 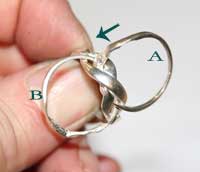 Rotate ring A anti-clockwise so that the arrowhead blob goes into the gap in the figure of 8. It can then slot into place like a door swinging on its hinges. Once A is in place, keep the assembly loose and then slot in ring D in a similar fashion.