These information pages and reports are intended as a guide to the latest developments in the field of silver jewellery, the silverstall and silver in 2010

The price of silver saw a 1% rise over the six months, once again due in part to uncertain economic conditions. An extraordinary influence last quarter was created by Australias' imposition of a mines and minerals tax which dampened some market excitement for this precious metal. Studies of recent derivatives indicate a slowdown and possible falls in the price of silver from January to March 2011.

The contents of this page and site are subject to strict copyright and intellectual property rights vested in silverstall.com.

On a local note we are pleased to see that the purple fencing at Drake Circus, Plymouth has finally been pulled down albeit 3 years late. The open park it is hoped will encourage more people into the city centre, although as one cynical observer noted planting an open garden next to the north hill bars and night clubs was a recipe for vandalism. We truly hope they are wrong as we have been lobbying for the removal of this fence for over 3 years.

Sorry for the inconvenience but currently google checkout will not work with internet explorer 9. We are hoping google will provide a fix for this problem however in the meantime you can still continue to purchase your jewellery via paypal.

We are making this site fit into internet explorer 9 so please bear with us for a short while as there may be computability issues that need to be resolved.

Last month saw a dramatic fall in the price of silver from nearly $50 per ounce to $33 per ounce however it has since rebounded and is currently back up to the $38 mark. The volatile market reflects uncertainties with the price of crude oil combined with political unrest in the middle East.

This spring sees unusually hot and bright days needing bright and shiny accessories. To fit the bill, silver comes first with its malleability and endless choice of design. Either alone or combines with a multitude of gemstones or amber this is really the season to show off that special silver.

As the price of raw silver rose to over $35 per ounce the future for silver jewellers looks uncertain. The problem is that investors are increasingly turning their backs on the traditional investment markets of equities and currencies. Concerns over environmental disasters in New Zealand and Japan have added further to the anxiety. The commodities markets are bullish with Gold and Silver prices booming. However history shows that every boom will bust and the silver market is no exception. So whilst there are indications the price will continue to rise there is also the possibility of a big fall, particularly as huge quantities of silver will shortly have to be sold in enable the release of capital to finance the massive rebuilding costs in Japan and New Zealand.

Happy Valentines day to all our customers. This romantic period is an ideal time to share your thoughts and feelings with a gift of silver jewellery.

A big thank you and a very merry xmas to all our loyal customers. We have been working around the clock to try and meet all the demand and postal challenges created by the weather.

Despite the xmas season opening against a backdrop of economic doom and gloom, sales of silver jewellery and beaded accessories remain buoyant. Luckily the Silverstall invested heavily into silver when prices were at their lowest. This will enable us to sustain stock levels at competitive prices for the next 4 years despite the ever increasing price of raw silver.

An open letter to the local authorities in particular the Plymouth city centre company who spend millions of tax revenues promoting their self interests.

"We note your (.gov.uk) website is promoting the Continental market as selling ".. traditional continental produce " We note many of the stalls sell clothes, watches and other products which are sold throughout city centre shops. In particular we note there are over 5 stalls selling identical copies of jewellery that we have made and sold in Plymouth for years. We note the market defames goods belonging to local shops in order to justify their inflated prices (often 3 times more than the local price) We note the stalls do not pay non-domestic rates despite their overnight permanent fixture and trade from prime retail locations at subsidised levels of rent. Aside the violation of competition laws and infringement of copyright there is a lot of evidence that these markets drive people out of the city centre as nobody will return to a place where, to put it bluntly, they have been ripped off. We and many other local businesses affected by this subsidised unfair competition will now embark on a very public campaign highlighting how local taxes are being used to drive out local competition."

The last quarter has seen a predictably steady increase in the price of silver. At a current average of 19 dollars per troy ounce, indications are that the price will follow an upward trend throughout the next quarter. One reason is increasing demand for silver as an investment. Moreover whilst its demand has dropped in the photography business, its demand in the silver jewellery market has risen proportionately to its decline in photography.

A chunky new amber bangle has been released in Amber's traditional orange colour. 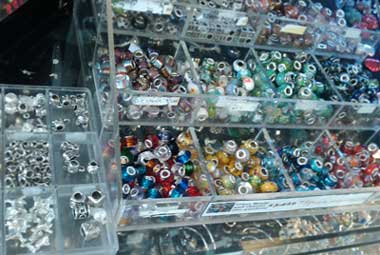 As yet another season of glass beads draws to an end, thousands of multicoloured glass beads with a range of metallic inserts, are being sold off in our shop at only 75p each. "we first started selling them in 1997 and their design has become a popular accessory for bracelets and necklaces giving the consumer the choice of colour and design" said Yiwen Wickes shop manageress. Many are sold off elsewhere under various names at silly prices.