The choice of colour can be influenced by the seasons. For example autumn is often associated with browns, greens and earthy colours that represent autumnal changes such as falling leaves. Winter on the other hand is sometimes associated with the bright reds found in Xmas decorations.

Is Silver a Colour?

Some say that Silver is in effect a reflective property and not a true colour. It is the sheen or glow from the colour grey and is not by itself a colour, however the Oxford English Dictionary has been describing silver as a colour since time immemorial and so the argument continues.

Silver jewellery generally blends with any colour due to the impartial and neutral colour of silver. Particularly small items such as the silver cross shown above, are suitable with any dress or outfit. Much larger items however may require a little thought.

Below is a silver choker shown on a variety of four colours. Decide for yourself which colour is most suited to the necklace. Ultimately as jewellery is a personal choice, the choice of colour is entirely your own decision. 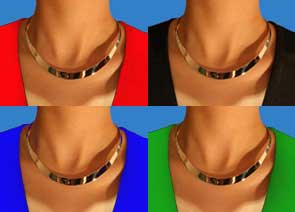 As you can see the silver necklace looks OK with any of these primary colours. Although it is a matter of personal taste many would argue that silver really looks it best with black or a dark colour. Other considerations are the pattern of the garment. Most jewellery works better with plain material, with only one or two colours. Moreover the matt finish of the garment is another aspect to consider. For example If the surface is particularly shiny consider a duller matt finish as a contrast.

Silver, along with blue and green, has a long assocaition with cool as opposed to the warm colours such as red, orange and gold.