Rooster people have a tendency to be deep thinkers and great achievers. They are slightly introvert and like to keep themselves unto themselves, but nevertheless they are interesting characters and are extremely brave people.

The Rooster sign enjoys harmonious relationships with the Ox, snake and Dragon. 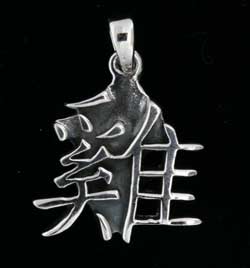 A silver pendant characterizing the Chinese birth sign for the rooster year. Those born under this sign include the English Writer "Stephen Fry" and comedians "Dawn French" and "Paul Merton". Occasionally it is referred instead as the year of the "cockerel". It takes over 20 careful hand crafted strokes of silver to recreate the Chinese word on this beautiful pendant.

Years of the Rooster

It weighs approximately 3 grams and is a finely detailed silver pendant in the old chine se script for the sign of the Rooster.