The Chronograph watch has been an essential feature of any jewellers window and no jewellery box would ever be complete without a good quality chronograph watch.

The various types of chronograph include:- 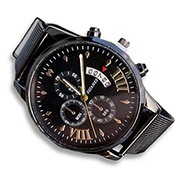 Our calendar watch is a good example of a chronographic watch 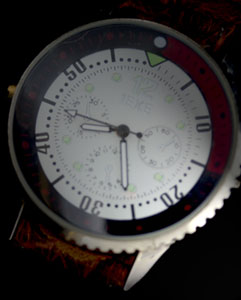 What does a Chronograph Watch mean?

In terms of a watch, a chronograph in essence, is a graph of the chronological sequence of time in a day. It therefore applies to a watch where its main function is to tell the time of day i.e. it is fitted with hour and minute hands (and usually a seconds hand) and the mechanism for recording parts of a minute is ancillary to these. The watch or instrument which records fractions of a minute or second and has no means of showing the time of day is a timer, such as is used for the purposes of sport industry and science. 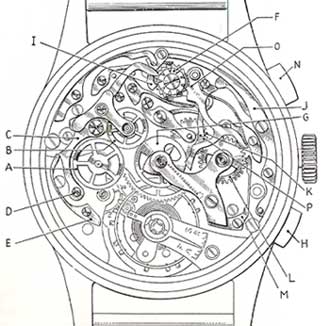 How the Chronograph Works

A typical chronograph wrist watch is shown above The action is quite simple. Wheel A is fixed fraction tight on to the extended pivot of the 4th wheel of the movement and this wheel gears into wheel B, which is pivoted on to lever C and therefore carried by it. Lever C is pivoted at D and can therefore rock back and forth within certain limits. Spring E bears upon lever C and presses it towards the centre of the movement.

Both wheels A and B rotate constantly while the main part of the watch is going. The nose of lever C is pressed against the castellated wheel F which is known as the column wheel. As this wheel F is made to rotate, the nose of lever C is either lifted on to or drops between the turrets of the wheel. When it drops between the two turrets lever C moves towards the centre of the movement and wheel B is then made to gear with wheel G and causes it to rotate. This wheel is known as the chronograph wheel and is fitted to its extended pivot is the chronograph hand.

When button H is pushed it causes the column wheel to rotate by reason of the pawl I pivoted on to lever J. The nose of lever C is lifted on to the outer edge of one of the turrets, which draws the wheel B away from the chronograph wheel G, and stops the hand.

Attached to the chronograph wheel is a finger piece which moves wheel K one tooth at each revolution. Geared with this wheel is another wheel L which has an extended pivot to which is fitted the minute counter hand. Therefore at each revolution of the chronograph hand, which takes one minute for a complete revolution, the minute counter hand steps forward one division on the dial and the number of minutes are thus recorded, up to 30, as a rule.

Purposes of a Chronograph

Its main purpose is to obviously to tell the time of day however many chronograph watches have important secondary purposes that measure a period or event of time in a day. Examples include the time to travel between two points or the count of the pulse. These secondary purposes make them similar to timers although the main function of the timer is to measure an event in time such as a football match.