The incandescent properties of the paua shell reflects a startling variety of green colours. Only natural paua shells from New Zealand are used. The only change that is made to the shell (which belongs to the abalone family) is that it is highly polished as its original condition is darker and duller.

Each pendant is boxed and although its size and weight will be the same there may be slight variations in the colour patterns as no one paua shell is identical to another. If you prefer we also have a round paua-shell

A Pear-drop of polished Paua Shell

£15.95 - A pear shaped paua-shell set on a pendant carefully hand-crafted from sterling silver. This relatively large pendant can be suspended from a chain or cord. The pendant swings freely from its bale and has a beatifully smooth and sleekly feel to it. The reverse side is flat, whilst the front is slightly domed in shape. 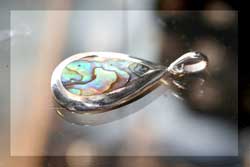 This attractive, iridescent pendant weighs approximately 8 grams. The paua shell itself measures 16 mm x 26 mm. The pendant can be suspended from a chain or thong up to 6mm thick. The shell is inlaid on the silver so that its edges are flush with the surface of the silver.