The crystal ball design was inspired many centuries ago by Buddhist monks and is often seen to resemble a disco mirror ball that was particularly popular in the 1970's. It has been known for decades as the shamballa bracelet.

Each disco ball is joined together by strong black cord that is stitched into the end balls.

The sliding action of the cord allows them to adjust and each bracelet is fully extendable to any wrist size by simply pulling their haematite balls apart. 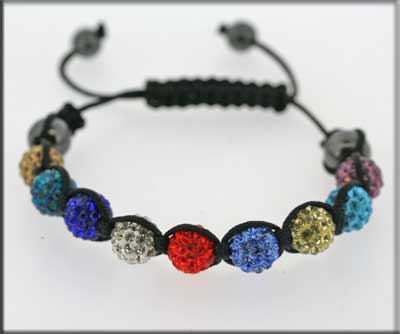 £2.95 - A Crystal Ball bracelet composed of nine disco balls decorated with real crystals. Two further spheres of magnetised haematite are found at each end. The length is adjustable by pulling the two end cords apart. 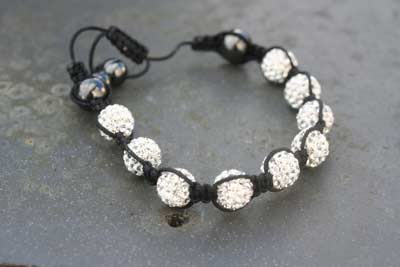 £2.95 - Nine disco balls decorated with brilliant white real crystals. Four haematite balls are found at the ends. They are magnetic. 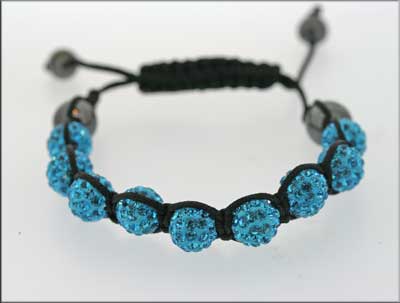 £2.95 -A bracelet threaded with the heavy duty cord. Unusually this bracelet is composed of nine light blue crystal spheres with a pair of the magnetic haematite beads. 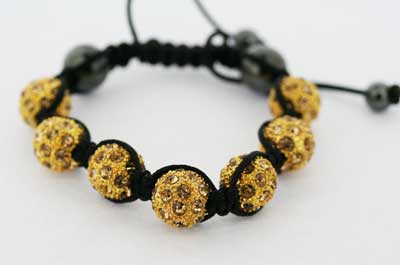 £2.95 - Seven spheres of gold crystals are sewn together with strong black cord. The crystal beads with this crystal ball bracelet are the slightly larger 12 mm ball-beads. 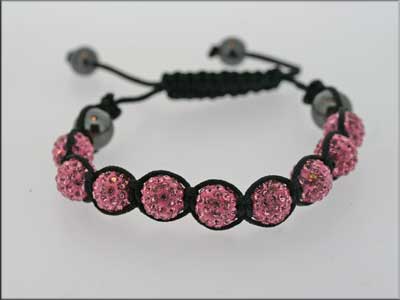 £2.95 - Nine spheres of pink crystals joined by the traditional black thread. This bracelet is simply pretty in pink. Magnetic hematite balls are used to tighten the bracelet.

Each ball or sphere is made from a strong adhesive resin into which each crystal is added by hand.

They all use real crystals.

The bracelet is growing increasingly popular and is now recognised as this years fashionable accessory.